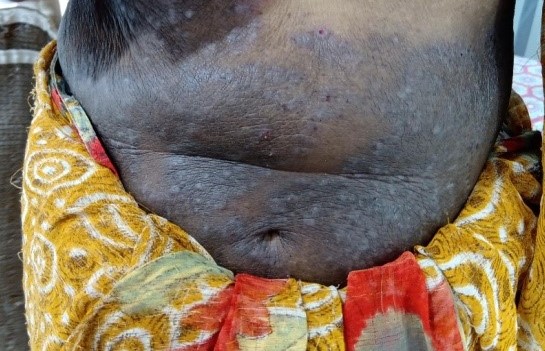 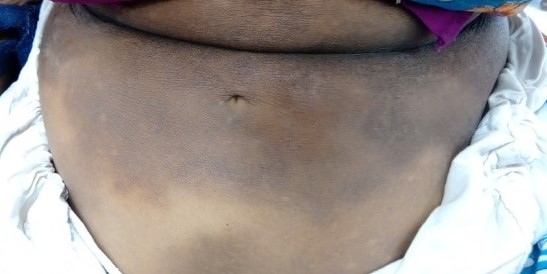 Eczema is the name for a group of conditions that cause the skin to become red, itchy and inflamed. There are several types of eczema atopic dermatitis, contact dermatitis, dyshidrotic eczema, nummular eczema, seborrheic dermatitis and stasis dermatitis.

Living with eczema can be an ongoing challenge. The word “eczema” is derived from a Greek word meaning “to boil over,” which is a good description for the red, inflamed, itchy patches that occur during flare-ups.

Eczema is usually itchy. For many people, the itch is usually only mild, or moderate. But in some cases it can become much worse and you might develop extremely inflamed skin. Sometimes the itch gets so bad that people scratch it until it bleeds, which can make your eczema worse. This is called the “itch-scratch cycle.”

Sharing this case of a 76 yrs old lady, who came with the history of severe eczema all over the body. Her whole abdomen had dried up skin with cracks with severe itching and burning. Her back, her palms, thighs and groins would severely itch. On scratching there would be lot of bleeding also.

She was suffering with this problem since 4 yrs. One minute also she couldn’t sit peacefully because of the itching. She had applied lot of ointments, taken lot of antihistamine tablets and antifungal tablets and steroids but there was no relief.

Along with this, there was loose motions, anything if she eats she would go for motions. Since eczema was there on the groins also, she would feel embarrassed to show to any male doctor.

She would stay at home most of the time. Avoid going out of the house, or any functions or marriage that people would see her scratching and would laugh.

She had a daughter who was not married and would stay sick. She was worried about her, who would take care of her after her death.

So considering the totality of symptoms,

1..Death Presentiment of, hurry must to settle the affairs.

2. Skin itching, scratch must, bleeds until it.

And immediately within 15 days.

The skin cleared up from the entire body.  She has been under treatment for the past 6 months and has drastically improved.

This is the picture of the before and after the treatment.